The editor was created specifically for creating vector art for the HTML 2D Canvas API in the form of native Javascript code. The editor exports Javascript modules by default.

I've been working on the editor off and on over the last couple of years, and I've used it to generate art for some of the games over here on itch.io. While I could use existing vector editors such as Inkscape/Illustrator or Blender to create art for HTML Canvas, I wanted a way to get the art into my games without having to rely on some kind of third-party importer. I also wanted some additional features such as nested transformations with grid snapping, as well as the ability to use all the features in HTML Canvas such as curves and dashed lines. Nested transforms allows for things such as rotating joints on characters, and nested snapping allows for keeping integer positions even inside rotated and scaled children (a feature I wish Blender supported too).

The exported code is minimalistic and dependency-free, making it easy to just copy-paste into your own code.

The editor supports most of the major features of the Canvas API:

The JSON format is used to store the original objects. The JSON files can be imported back into the editor at a later stage. Non-scene objects can also be imported into existing scenes. Imported scenes replace the current scene.

The Javascript Module format contains the rendering code for drawing the image in a HTML Canvas. The following is an example module exported by the editor:

Some things to keep in mind:

The generated code is your own, and is provided without warranty of any kind. Please understand the risks associated with using code generators in Javascript, and do not import JSON files from unverified sources.

Any exported template code (the parts which are hard-coded) is licensed under CC0.

The font used in the editor is JetBrains Mono under the Open Font License.

Please report any bugs or issues with the exported code or feature requests in the comments or in a private message. 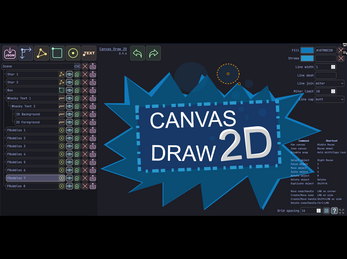